You are here:
BlogNetballNetball Dresses Design Your Own 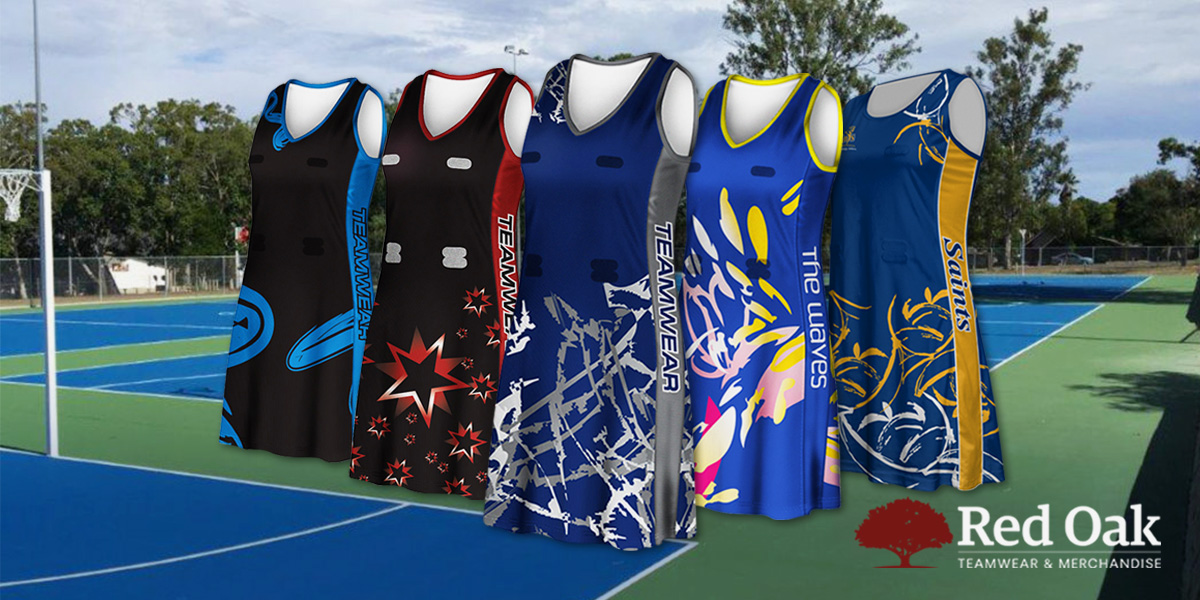 If you’re looking to custom design netball dresses that will set you apart from the competition you’ve come to the right place. Red Oak Teamwear is Australia’s leading supplier of custom teamwear.

We have a wide range of netball dress styles that you can customise in any way you like. With low minimum order numbers, choosing Red Oak also means you won’t have to sacrifice on an amazing design or high-quality netball uniforms.

If you’re ready to get started ordering your custom netball dresses now, simply call our helpful team on 1300 734 708 or enquire online here.

We’ve worked with netball players around the country to develop four (4) netball dress styles (shown below) that your players and club will love – no matter whether you play competitively or socially.

Modern fit with a great A-line shape.  This dress offers full coverage across the back and shoulder area.  It’s one of our best sellers and loved by the 100’s of clubs wearing this style around Australia.

Also an A-line shape, the club racer back dress is cut away at the shoulders, making it comfortable to wear with more freedom of movement. This style is also very popular and a big hit with the clubs that have chosen this style.

The Hybrid Netball Dress offers the same modern fit as the A-Line dress but with reduced shoulder width to aid movement and flexibility in your Netball Dress.  The image below highlights the adjustment in should width.

The Racer Back Netball Dress is a more fitted netball dress than both the A-Line and Hybrid styles. It has the racer back styling across the shoulders which is more in line with the pro fitting Netball Dress styles.

We offer the Performance Micromesh in front and back panels with sensor mesh used in the side panels to increase further flexibility and the piped side panels create a sleek  and professional look, which is why we’ve named this our elite style.

Our netball uniform range is comfortable to wear, looks great and specifically designed to help keep you cool during the toughest games.

Made with quality performance micromesh fabrics and contoured Velcro pieces – netball dresses and bibs made by Red Oak are durable and built to last.

Every style can be customised with your colours, logos and team name included at no extra cost.

You can also create any number of branded or team apparel and accessories such as our polos, jackets, visors, socks, water bottles, bags and towels – perfect for training, competitions or tournaments, and supporters gear. We also have a large range of end of season gifts suitable for small to large clubs.

With so many fantastic netball dress options to choose from you can be sure that you can find a style that works for your team.

Perform at your best with custom designed netball dresses from Red Oak Teamwear.

If you’re ready to start designing your own netball dresses with the help of our whip-smart creative in-house designers call our helpful team on 1300 734 708 or enquire online here.

Red Oak Teamwear is Australia’s leading supplier of custom sportswear and accessories. We offer a personalised service and take the time to listen to and understand your needs. We use premium materials and only partner with the world’s best suppliers.

How to Avoid Getting Slugged by COVID-19 Air Freight Price Hikes
June 26, 2020

Day in the Life of an Event Apparel Specialist
June 19, 2020